When the Web first emerged, there was a hole in the user experience world. Many people practiced interaction design, but their community was shoe-horned into those of other disciplines like IA, HCI, and Usability. At the time, most of the UX community felt like that was sufficient.

Then the Web started to change, and the conversation with it. That hole seemed all the more gaping. The “IxDA”:http://www.ixda.org/ was formed in 2003 and fit nicely into a space amongst those other communities of practice. The IxDA discussion list was (and still is) an interesting place to be; it nurtured conversations different than were happening elsewhere. They were all about interaction design, and that purity lent a focus that took the ideas of Web 2.0 and ratcheted up the thinking several notches.

As they reached a certain concentration point, it was obvious to the IxDA faithful that a conference was a logical next step. All those other major practices in the UX community of practice had their own events. The lack of an interaction design gathering during the conference gauntlet was quite obvious, but who had time to put on the show?

I attended that first conference, “Interaction 08”:http://interaction08.ixda.org, last year in Savannah. The event was fantastic. The partnership with the “Savannah College of Art & Design”:www.scad.edu/ (SCAD) raised the bar, giving the conference unusually deep connections into the community. That’s interaction design.

The speakers were experienced and incredibly varied, covering the hallowed ground (Alan Cooper, Bill Buxton) and the vanguard (Bill DeRouchey, Matt Jones, David Armano), all the while adding with some key folks from other disciplines (Jared Spool, Malcolm McCollough, Chris Conley). See “last year’s recordings”:http://interaction08.ixda.org/videos.php. Even though they are one year old, you will find something inspiring.

Your inspiration might be:
* Bill Buxton’s admonishment to throw away five designs before keeping one
* Matt Jones telling the world how they created Dopplr, making great design sound like no big deal
* Sigi Moeslinger’s images of the NYC subway car that she designed so that kids are not able to climb the hand rails

All of the sessions were filmed and placed online within days of the conference ending. (Though, as an IA, I have to protest that the slides were often not given sufficient treatment.) 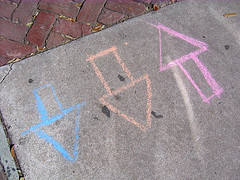 We constantly came across little touches that you would never expect from a conference. A great example of this was the arrows chalked on the sidewalk between the three buildings that housed the conference sessions. Color-coded by track (as shown on your badge), they were incredibly useful and, like Savannah, quite charming.

No, not everything was perfect, but that should never be the expectation. I challenge you to find a better-run example of a conference’s initial event, especially one that was planned for 250 people, but 400 showed up. And placing the conference in the small, but interesting and cozy hamlet of Savannah, GA, was a stroke of genius. Interaction 08 had an intimate air. Plenty of distractions allowed us to escape from the geek talk, but the city didn’t pull you away as do most.

Vancouver is a great town, but I hope that the IxDA will consider doing something similar to Savannah next year.

Why am I talking about this now? Well, to be honest, I feel like I haven’t done enough to let people know how great the conference was. Here we are, two weeks from to “Interaction 09”:http://interaction09.ixda.org/program.php in Vancouver, and I feel nostalgic about last year and realize that I will miss not being able to go this year.

Even if you can’t don your superhero costume and get to Interaction 09 this year (which you should do if you can), think about it next year. Interaction is fresh, vibrant, and takes a usefully different perspective on the issues we encounter every day. I know I’ve designed differently because of that experience.

Viva la Interaction 09, and Happy Conference Season to all!