In my current role, I have been responsible for creating a large intranet site from scratch for a local government department, and I now have the ongoing problem of maintaining it and ensuring all information is kept up to date.

The initial model for the site worked surprisingly well for a time but has been the victim of its own success. It now has well over a thousand pieces of internal and external content, and staff surveys have shown that findability has deteriorated over time. (Is there a law in that somewhere…? Same model + more content = poorer findability?)

I wasn’t surprised. I had reached the same conclusion some time before. The system was creaking at the seams and needed major surgery.

I realized I could no longer rely on memory alone for a record of what the system contained—the content space was getting too large. Content needed to be periodically checked for currency and completeness to ensure that the system retained its credibility with users.

I was also feeling uncomfortable about succession planning issues because knowledge of the intranet’s structure and content existed only inside my head. If I got knocked over by the proverbial bus, it would be very difficult for someone new to visualize how the system was structured. I soon reached the conclusion that a formal content inventory system was needed.

I only found out that I was an IA a year ago, but I quickly gathered that doing a content inventory, while an important tool, is on par with cleaning out the garage or reconciling your bank account: Necessary, but no fun.

Bearing in mind the complexity of the site, I decided that any inventory needed to have two attributes:

I felt the structural attribute was of greater importance. My mental picture of the intranet at this time was of a large plate of spaghetti. What linked with what? If I move this page, what else will it affect?

I did some research but could find nothing that answered my purposes.

Part of the Solution

The data attribute was easily achieved. I have worked with Access databases for quite a while and found them to be of great use. Creating the database was the easy part.

The structural attribute was the real problem. I had the latest version of Visio loaded on my laptop and started to play around with different ways of visually representing the intranet linkages.

I tried the ‘family tree’ approach, system mapping, business process charts, and so on, and found that there were two major problems with all of these approaches:

I was feeling a bit desperate. The date for the redesign was looming large and I dreaded the thought of carrying out such major surgery, as it were, in the dark.

Then I stumbled across the ‘Metro’ stencil in Visio and this brought to mind an attempt I’d made some time ago to produce a site map based on Harry Beck’s 1933 map of the London Underground, a concept now used in most public transport maps around the world.

I thought it was worth another try and started to build up a structure of the home page using the Metro stencil. I was pleased with the initial result. There was a clarity and simplicity in this approach that allowed me to concentrate only on the hierarchies and categories that formed the structure. I could also easily play around with all the elements by dragging them singly or in groups around the page.

What it needed to be complete, I thought, was some way of inserting links so that I could have a look at the actual webpage and some way of expanding the pages attached to the home page to show sub-maps. Both proved to be very simple. The insert hyperlink function works more or less the same as in Microsoft Word, so I could now link the page (station) titles to the relevant web pages.

I could easily create sub-pages by using the insert new page function in much the same way as in Microsoft Excel. Using the stencil, with some customised components, made creating sub-maps very easy, especially when similar structures already existed on previous pages. Whole lines and ‘stations’ could be quickly copied and pasted. The new sub-map could then be linked by a bookmark from the station roundel on the home or higher level page.

The different colored lines can be used to represent anything. The page below is one I am working on the moment. In this case, the green line pages are sub-pages, the blue line pages belong to other sections within the site, and the red line pages are external links. 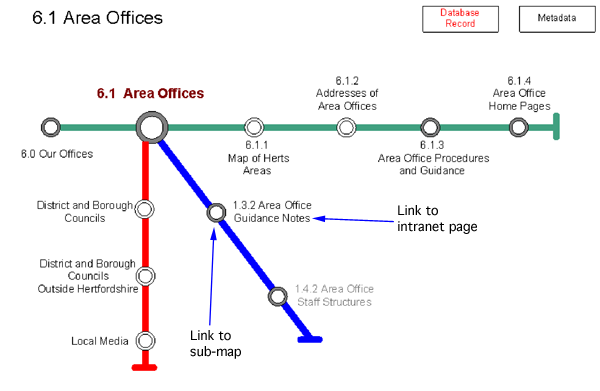 Saving the whole document as a web page meant that I now had the ability to quickly click from map to map and, when I needed to look at the relevant web page, it would be only one click away. So far, so good.

Rest of the Solution

The new problem I had now was that my content inventory was effectively in two halves – data in one, structure in the other. I needed to connect them. Fortunately, the Visio people (and Donna Maurer) had already thought of this. By selecting Tools/Add Ons/Visio Extras/Link to Database, I found that I could link a shape to a particular Access database record. When saved again as a webpage, Control + Click displayed the database fields on the left hand side of the screen. I could now view both the data and the structure at the same time.

It was about this time I was seen dancing around my desk, shouting ‘Yes!’ 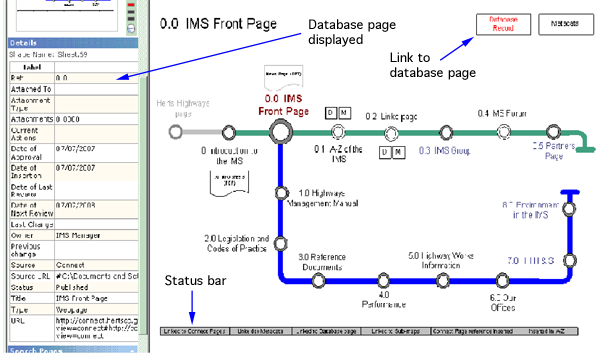 Before I attempted any surgery on the intranet, I produced a map of the front page and major categories (above) and created sub-maps to drill down as far as possible. Iterative reviews eventually revealed a massively simplified structure. Once I was satisfied, I began surgery, using the maps to ensure that I kept strictly to the designed structure.

It’s working really well. I can only compare it to the joy of having a satellite navigation device in your car when trying to find a street in a town you’ve never been to before.

There were standard activities required for every page, such as link to database, link to sub-maps, link to webpage, and the like. To ensure that I didn’t miss anything, I created a status bar through which I could easily track what had been done for each page. I found this a very useful tool because I often had to stop and work on other projects. Tasks done were greyed out so that outstanding tasks could be clearly seen.

How To Do It

This approach to content inventory (I call it bird’s eye view, for want of anything better) should yield more value than the normal approach to an inventory. When I design my next intranet, I’m going to start with the maps, creating as much structure as possible and then validating it with clients and users. As it is a well known paradigm, most people get it straight away, with one caveat: I sometimes needed to explain that you don’t need to go through one ‘station’ to get to another.

Spending time planning the site at this early stage, especially when able to build in user research, should save a lot of time down the line.

Once the basic structure is set, the pages can be numbered and the database pages created and linked. Before a single webpage is coded, a ‘statement of requirements’ or wireframe may be produced for major pages. The map can function as the ‘spine’ of the development process by ‘station’ titles being linked to the statements or wireframes allowing the structure to be evaluated for completeness before coding begins.

The use of the status bar also allows for collaborative working as teams can easily see what has been done and what needs to be done on any page.

This approach provides a tool that can be used throughout the lifetime of a website. It starts off as a development tool, allowing the structure to be considered and documented without the distractions of other irrelevant information. It can be easily understood by users and clients and their views can be sought at an early stage.

Throughout development, the map can be iteratively assessed and amended and the database pages can be used for notes. The use of the status bar or similar can provide a quick indication of progress to date for each page.

The map, being a webpage, can be easily accessed and can be made available to stakeholders if required. This way clients, and even users if an intranet, can follow progress without having to be updated by the development team.

Finally, when the project is complete the content inventory can be handed over to whoever is managing the site as a tool for maintaining the site and controlling content. It could even be made available to users as an alternative way of navigating the website.

After giving it some thought, I find that the thing I like most about the map is that it is pure, stripped down navigation. Harry Beck decided that including streets, districts and other geographical information on his underground maps was distracting and added little value. All you need to know is how to get from A to B. I suspect that the same may be true in information spaces.

If you want a copy of the Visio stencil, you can get it here.

If you want the Mac stencil, you can get it here.