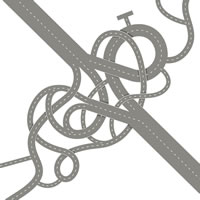 The best products don’t focus on features, they focus on clarity. Problems should be fixed through simple solutions, something you don’t have to configure, maintain, control. The perfect solution needs to be so simple and transparent you forget it’s even there.

However, elegantly minimal designs don’t happen by chance. They’re the result of difficult decisions. Whether in the ideation, designing, or the testing phases of projects, UX practitioners have a critical role in restraining the feature sets within our designs to reduce the complexity on projects.

Why you should reduce complexity in scope

If we begin to discuss scope as complexity, instead of flexibility, it changes the conversation as it reinforces there’s a correlation between the two. Indeed, they’re really the same thing. Complexity is scope. Every new feature creates additional guesswork. To put it bluntly, increasing scope means there’s more opportunity to screw things up.

As well as making things more difficult upfront, unnecessary features set up additional complexity with future releases. This is because the user interface groundwork early in projects establishes constraints. We have to live with the consequences of our initial design decisions through future iterations. So a tight focus on features early on is crucial. The alternative, trying to solve too much too soon, means initial design decisions become high risk.

As well as reducing the technical complexity, an elegantly minimal feature set clarifies the proposition of your product and simplifies the experience for the user. Any feature that doesn’t help solve problems for your audience should be thought of as a distraction, an unnecessary obstacle that undermines the value of your product.

Where to define the scope isn’t easy. Different users will have varying requirements. There’s also the grey area, where removing functionality can result in a drop in the value and revenue of your product.

Also, simplifying a design to reduce it’s perceived complexity doesn’t always work and can create significant barrier for users. A good example is financial software, where the user interface is built around tasks which are inherently complex.

However, simply because a task is complex doesn’t create an excuse for designing a complex user interface or user experience. We should architect solutions around how much control is truly needed. Truly exceptional experiences are crafted when complexity is removed whilst the level of power and control is maintained.

Once your initial scope (or the level of complexity you’re comfortable with adopting) has been defined, the best approach is tackle one feature at a time. Design the first iteration around the most critical and well understood problem.

Unnecessary features are a distraction for developers and designers. They draw people away from optimizing the little details or other things you could be doing to help your existing customers. They also dilute the core proposition of your product and the prominence of the most important features.

Clearly understand what new features you need to add and what the implications of developing them are. Classify features into mandatory and nice to have and the put all the mandatories through a review to ensure they really are mandatories. Ultimately, you have to accept there’s a gray area where, as you strip out features, the expected revenue will fall.

Why you should reduce internal design complexity

Complexity cannot simply be expressed by feature creep. It can still exist within a minimal viable product, as features themselves can behave in unnecessarily complex or unconventional ways.

Despite successfully restricting a tight constraint on features to an elegant minimum, we need to think about the complexity of the features themselves. This can lead to instances where the most appropriate remedy to internally complex features is an additional feature.

Here’s an example. On a recent project, a client insisted on an autosave function for a particular part of an interface when the addition of a save button would have made the interaction and its outcome much more intuitive to the user (as testing later confirmed).

The increased complexity of expanding the scope of the minimum viable product was offset by the decreased internal design complexity of aspects of the system’s technical and user interface.

“What happens to user experience in a minimum viable product?”, by Ryan Singer, http://feltpresence.com/articles/9-what-happens-to-user-experience-in-a-minimum-viable-product

“The Dirtiest Word in UX: Complexity”, by Francisco Inchauste, http://uxmag.com/design/the-dirtiest-word-in-ux-complexity

“How Instagram Stays in Focus”, by Joshua Porter, http://bokardo.com/archives/how-instagram-stays-in-focus

“Flashback: Every time you add something you take something away”, by 37signals, http://37signals.com/svn/posts/2917-flashback-every-time-you-add-something-you-take-something-away

When looking at a feature set and deciding what can be safely eliminated without endangering core goals, reductionism is a double-edged sword., Taking the simpler view inherent in the ‘Minimal Viable Product’ mentality will result in cleaner, easier, more elegant and achievable designs. No less regularly, however, the process of reduction blinds us to unseen compromises in the functional simplicity of the solution as a whole.

The broader, zoomed out view may actually guide us to adding function to a feature here or there, all in the service of simplicity at the more general level.

Take the above example of the autosave function: the complexity of correctly intuiting the behavior of this single feature is one thing. Adding a function to the feature reduces the chance of the feature being misunderstood or misused. Beyond that, however, it would also have ensured that the instance of counter-intuitive behavior does not set precedents for how the wider solution is perceived.

This is the paradox: you can have the most elegantly minimalist feature set imaginable, but you will not attain simplicity if you don’t apply the principle of simplicity both holistically and flexibly. Features that are simple in isolation can become a contagion.

A core difficulty with discussing complexity and user interfaces is that it’s easy to misclassify the level of complexity. It’s a qualitative concept. As such, it’s important to keep a check on the subjective nature of our discussions. We have to be aware that complexity can only be reduced to a particular point, past which designs can lose both their utility and appeal.

It’s also not whether a design approach is more or less complex. The issue is that we’re talking about the experience of the system, not a quantitative measure of complexity. Ultimately, to determine the impact of scope complexity and internal design complexity across the overall user experience, complexity needs to be understood within a context.

The result is that many of the discussions on complexity and simplicity are polarized around whether or not complexity is an additive property. But, perhaps there’s nothing wrong with that, you should have a clear opinion on the products you make. Software should have your personality ingrained within it.