Combine the probing thoughts of media culture sage Marshall McLuhan with the visual insights of design guru David Carson and the result is the quintessential coffee table book for anyone that works with technology and design. The Book of Probes is an intentional chocolate-in-my-peanut-butter experiment to combine the ideas of McLuhan with the images of Carson in thought provoking ways. For the uninitiated, some introductions may be in order.

Marshall McLuhan, once referred to as the “Oracle of the Electronic Age,” is perhaps best known for his phrase turned into book title, The Medium is the Massage. His massage/message word play and other bold perceptions, which he called probes, still continue to spark debate. McLuhan’s ideas about the “global village” and his division of media into hot and cool categories are just some of the reasons why Wired magazine named him its patron saint.

David Carson, a former professional surfer and sociology professor, is considered one of the most influential graphic designers working today. Newsweek said Carson “changed the public face of graphic design” and one of his books, The End of Print, is the best-selling graphic design book of all time. Carson continues to break the rules and redefine his field through work with Levi’s, Nike, Pepsi, Sony, Coca-Cola, American Express, Lucent, MTV, Ray-Ban and many other clients.

The Book of Probes puts graduate school reading assignments into a blender with graphic design edginess. The first 402 pages of the compact book are an intricate mental and visual playground. The remainder of the book contains some commentary from the book’s editors and a little more insight into McLuhan’s thinking. The editors help to explain how they selected various probes from Marshall McLuhan’s more than 200 speeches, classes, and nearly 700 shorter writings that he published between 1945 and 1980. With such a wide range of selections, some readers might not be able to decide which part is the main course and which section is dessert. 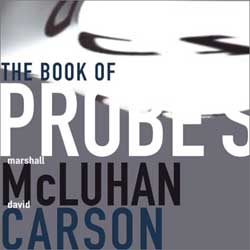 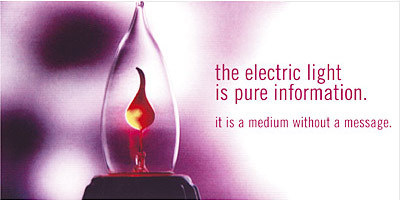 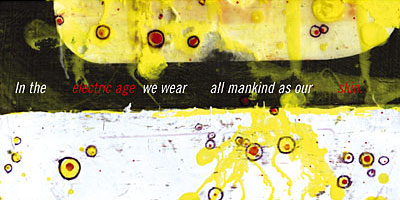 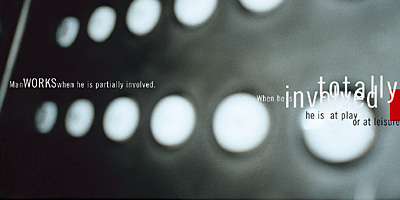 The art direction and design in The Book of Probes is by David Carson and is a visually entrancing encounter. Admittedly, there are segments of the book that might give some readers headaches or trigger vasovagal syncope in small children. But McLuhan’s ideas and Carson’s images have always been known for their ability to shake things up. You don’t really read The Book of Probes. You experience it. It’s more like drinking a fine scotch than downing some bottled water.

Perhaps the most striking component of the book is the variety of photographic, typographical, and visual manipulations and inspirations Carson has employed to bring McLuhan’s probes to life. The probes themselves have been divided into sections of the book like “Media Ecology” and “New Science of Communication” to bottle the lightening of an immense intellectual thunderstorm. The medium enhances even McLuhan’s messages like, “Color is not so much a visual as a tactile medium,” and “The most human thing about us is our technology.”

The key thing to be aware of about The Book of Probes is that you don’t have to know a thing about Marshall McLuhan or David Carson to enjoy the book. The thoughts and imagery are a good introduction to some big concepts and probing theories. You might also find yourself scratching your head in confusion or just plain shaking it in disbelief. McLuhan’s probes are still just as controversial and puzzling today as they were when he first voiced them. Carson’s design treatments only intensify those sentiments throughout The Book of Probes.

Marshall McLuhan believed that the print revolution begun by Gutenberg was the forerunner of the industrial revolution. David Carson has done a laudable job illustrating some of the biggest ideas about the digital revolution in print. Imagine if Michelangelo could have illustrated Gailileo’s radical ideas or if Vannevar Bush and Pablo Picasso could have worked together. The Book of Probes allows Carson to work posthumously with McLuhan and will hopefully encourage similar collaborations in the future.

The Book of Probes is a book that stands uniquely apart from what takes up space on your local bookstore’s shelves. But perhaps that is a reflection of the incomparable individuals that helped create it. The marriage of these two minds shows promise for future combinations of scientists and designers. Contrary to popular belief, these two disciplines can work well together. The future of the digital revolution could be helped by more visual representations of sometimes complex ideas and subjects. The Book of Probes helps to gets us all thinking and seeing things in a new way, and to keep moving in the right direction.