I will show that the Netflix mechanism contains characteristics of updated theories of emotion—mainly constructed emotions theory—but it still lacks several essential components.

The lack of these components can explain some inaccuracies in Netflix recommendations and can suggest broader implications.

The traditional view of emotions (Paul Ekman
[1], as an example) is that people are born with a set of emotions—fear, anger, sadness, and the like.

Because we are all born with emotions, the traditional view is that these basic emotions are similar across all human beings.

One of the leading new theories is the constructed emotions theory. According to this view, emotions are learned, not born. Different people, therefore, have different emotions; cultural environment influences these emotions.

The process of emotion begins in the brain. The brain tries to identify the physical environment, to understand what this environment has signified in the past, and what the cultural norms are related to this scenario. Following this analysis, the brain suggests an emotion most suitable to this context.

The context itself is also a factor; a different environment with identical traits would produce a different interpretation and thus a different feeling.

A simplified history of recommendation systems

A content recommendation area—such as Netflix’—shares general characteristics with the emotion analysis field.

With recommendations, we try to understand what the next thing a person would want to do or feel—such as when a person wants to feel frightened.

In a recommendation system, the system must analyze both the user and the content. My claim is that the main effort is focused on understanding the user rather than the content.

If we use the wrong method to understand what people want, no amount of data will make it more accurate.

Don’t laugh. I’m sure you’ve done this before. At the office, there’s a refrigerator cleanup every two weeks. At least I think it happens every two weeks. The office administrator sends out an email or posts a note on the fridge, warning you that things will be dumped if they’re not labeled. You’ve seen these long-forgotten food containers of who-knows-when science experiments pushed up against the back of the fridge. Same with those things that start growing in your pantry…. Don’t ask. I won’t continue. Please don’t tell my mother I had so many potatoes left.

When it comes to explaining governance, the one in the kitchen is the best example to illustrate exactly what happens when you take a taxonomy for granted. Not only do you see it, you smell it. You’ll feel it if you consume the foods way past its best by or expiration date. You’ll taste the food quality deteriorate if the ingredients used are not as fresh as they could be. What better way to illustrate ROT analysis than the five senses? This kitchen analogy doesn’t stop at organization.

END_OF_DOCUMENT_TOKEN_TO_BE_REPLACED 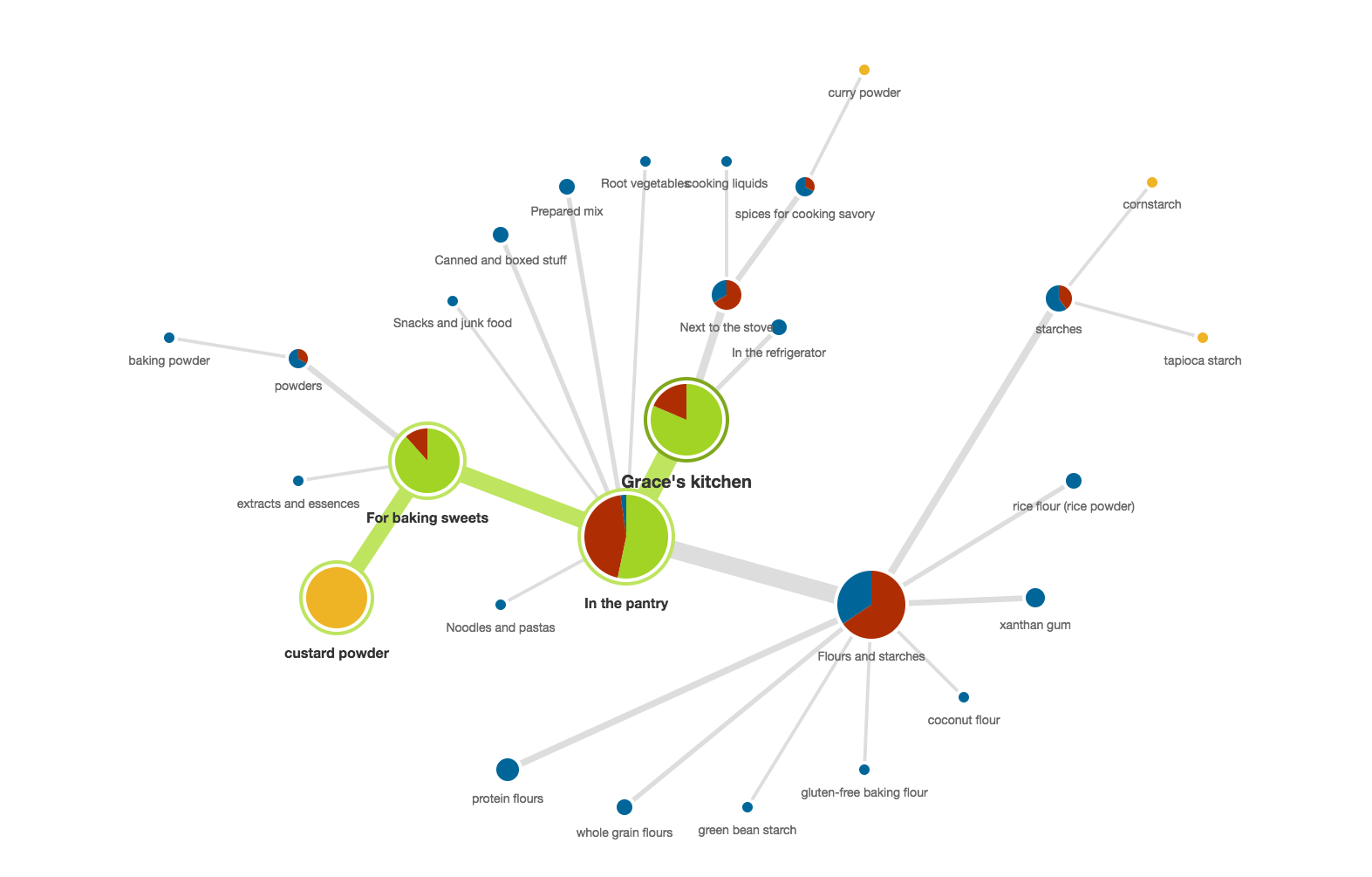 Tree testing is an effective technique for evaluating navigation and taxonomy. In an environment devoid of visual design and cues, tree tests are useful for assessing existing site navigation and proposed site structure changes. Using my kitchen, I devised a plan to test the findability of my kitchen’s spices and pantries.

END_OF_DOCUMENT_TOKEN_TO_BE_REPLACED 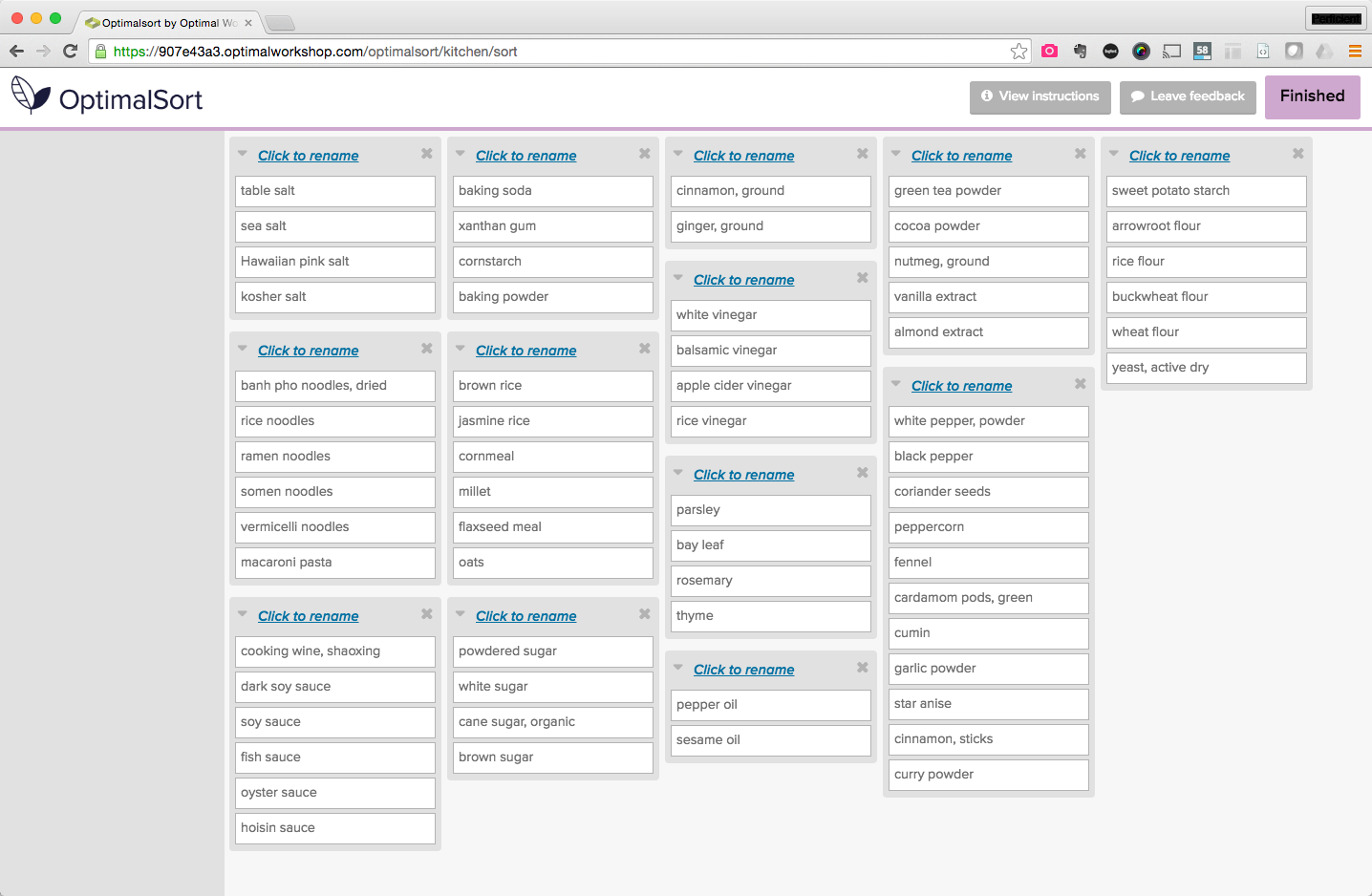 This is the fourth in a series of real-life examples of taxonomies found in my kitchen. Part 4 of “Taxonomy of Spices and Pantries” looks at how card sorting studies can inform a taxonomy.

END_OF_DOCUMENT_TOKEN_TO_BE_REPLACED

Conversion is most often defined through sales, but it can also apply to clicks, sign-ups, repeat visitors, or any other metric that meets your organization’s goals.

The real problem many organizations face regarding conversion, is that content is often still considered “the stuff that goes into the design.” Putting content at center stage means changing some of the fundamental ways we think about content in the design process and how it helps conversion.

The principle of ‘form follows function’ states that the form of an object must be based on its intended purpose, and UX is no different. Since the primary function for any brand’s website is to engage, inform, and convert visitors into consumers, then the design of that website should be created primarily to support its content, or the “stuff” that has the greatest potential to engage, inform, and convert. The folks over at GatherContent, as well as several others, have begun calling this a “content first” approach.

From our viewpoint, content first doesn’t mean sacrificing design, or other elements of UX, but it does mean that content goals, which are often defined through business goals, should drive design. The elements of design—from the architecture and navigation to the look and feel to the code functionality and everything in between—are all components that come together to help the user reach their intended goals in the most efficient and enjoyable way possible.

Both CRO and UX should be about helping people reach their goals. That’s how you convert. You give people what they weren’t even sure they were looking for.

But how do you do that?