Holiday lists, to-do lists, grocery lists. With the end of the year come the holidays, and holidays are usually a time for … that’s right … making lists. Take a look into the process (and obsessions) of list-making from our staff. Have a sparkling holiday season and may all your lists come true.

If one kind is left out—even if most folks don’t really like them—there is an uproar. Tradition is important in our house, and more than ever now that my daughter Amelie has joined the world. This is one list I have to check twice!

These last two are my favorites, and the recipes for them are here, written in my mother’s hand.

Holiday music list
I am a teeny bit obsessed with using iTunes to make playlists. I cannot describe how much I love music mixes. Putting together a bunch of songs in an unexpected way to set a mood or match a particular occasion just makes me all giddy. This pursuit used to take hours (when I was finding songs on record albums and taping them). Now it’s merely a matter of going through my library and dragging songs to a playlist. Such joy. 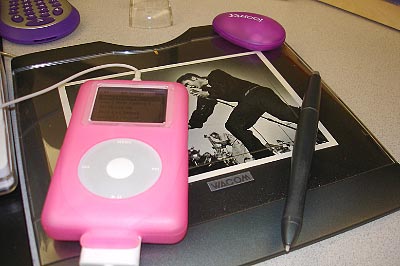 For your listening pleasure, I’ve made a new playlist in honor of the holiday season. It’s not really full of holiday songs, although there are a few–it’s more about the feelings, good and bad, that this time of year evokes.

Get Dorelle’s Holiday Mix at iTunes, and at Y! Music.

Palm lists
The best thing about holidays is traveling, and whenever you travel, it’s critical to bring the right gear along with you. So this is a time when lists come in handy, to help you make sure the right luggage is there.

I have a small application in my Palm Pilot that lets me make all sorts of checklists. I use Checklist by Handmark, which allows me to make several lists, sort the items, and even beam lists to my wife. Once you check an item, it can disappear, shortening a list until it’s done without the need to scroll down. 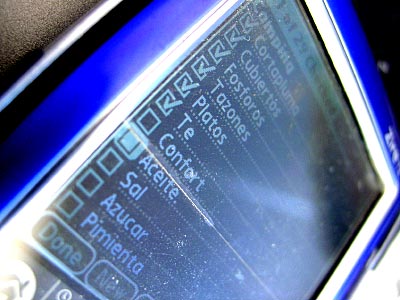 My longest list is for doing groceries, but I rarely use it–paper and memory are handier for daily stuff. But the lists I force myself to use are my packing lists. I have one for weekend escapes, holiday vacations, and another for camping trips.

Of course, they all include my camera gear, the difference is made by the food and cooking supplies, travel documentation, and kinds of clothes needed for the situation. Using these lists, it is safer to drive away without the feeling that you have to find out what you left home before it’s too late to turn around.

Online lists
Ta-da Lists, a free service from the good folks at 37 Signals, are a great way to create and manage lists online. (Really–it’s free). After a painless registration, you can create as many lists with as many items as you need. Just check an item and it moves to the bottom of the list, signaling it’s completed. Editing lists is effortless, but reordering items is a little clunky. You can also share lists with others, email them to yourself, and even set up an RSS feed.

I tend to use online lists for longer-term inventories of things like gift ideas, repairs around the house, and music I want to buy. Think of a great gift for someone six months before his or her birthday? Jot it down online. Or, if I read a review of a CD I eventually want to investigate, I’ll add it to my “Music” list. This way you can snowball ideas, thoughts, and catalogs of things over time.

The portability of Ta-da Lists is key. Anytime you’re online you can access your stuff. OK, it’s no Memex, but it can help you recall things. If you travel a lot or move between computers, it’s quite handy to have a single record. You get a simple URL in the format “yourusername.tadalist.com”–very easy to remember.

Daily to-do lists are better on paper, close at hand, in my opinion. So it’s a combination of old-fashion, handwritten to-do lists and online list management that helps me keep track of things.

Mantra box list
2005 was a challenging year for me; big changes in my life have forced me to reexamine some of my values and objectives. As part of this process, I’ve been trying to become better attuned to my inner voice—to approach important decisions in a more intuitive manner. One tool I’ve used during this time is what I call my “mantra box:” a list of phrases and words that I’ve come across in my reading, or in interactions with others, that resonate deeply with me.

Here is how it works: I keep a stack of 3” x 5” index cards and a Sharpie marker with me most of the time. When I come across a phrase that “calls” to me, I immediately write it on a single card in large block letters. It goes into my mantra box—one of those cheap card boxes you can find at drugstores.

I try to keep my “judging mind” out of the collection process; some phrases are trivial, obvious, or tacky. Others are quotes from personal heroes. Still others are somewhat mysterious at first; the full reason for their attractiveness is only revealed to me at a later time, when I’m in a more contemplative mood. All of them go into the box—the sole criteria for admission is having struck a deep chord in me.

Sometimes—when I’m feeling introspective—I review the contents of the box. If a particular mantra feels relevant to my current situation, I copy it to my day planner where I can refer to it frequently, and bring it into my daily life. (I don’t throw out mantras: it may turn out that even the stupid ones have a reason for being there.)

Here are, in no particular order, some of the phrases and words that have spoken to me—and merited a place in my mantra box—in 2005:

Buy me and open checkbox lists
Every day, I use at least two lists:

1. The Buy-Me method
While I pretend not to be cautious about music, I do tend to try a track or two before I buy an album. About once a month, I view the handy “Buy Me” smart playlist I created in iTunes. In it, neatly sorted by Play Count, are the tracks I’ve been listening to most often. No need to think about value of the purchase or an album’s potential for pleasuring. Chances are, if I’ve listened to a track at least once every three days for three weeks (roughly), I should buy the album. The Buy-Me recommendations are often a surprise to me, which is kind of a fun by-product of the system (no pun intended).

2. Open checkbox method
Although I’ve tried all kinds, paper-based to-do list works best for me. Even though it’s analog, a consistent visual vocabulary helps me get things done. Here’s how it works:

When I need to get something done, I create a new list item. Each list item gets an open checkbox and a name. Other variables might include: 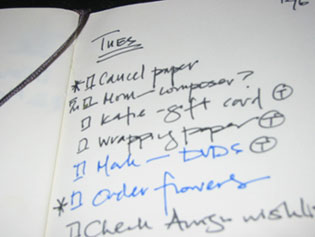 When a task is complete, I put a check in the checkbox, allowing the satisfaction of crossing something out without rendering the item illegible. Oftentimes, I must refer back to completed items, so I prefer to have them available. Sometimes, a task is still unchecked after a significant period of time or several pages in the notebook. In these cases, a strikethrough is necessary, and the unchecked item gets moved to a new page. When an entire list is complete, I put a strike through the entire page.

Refrigerator lists
I write lists for lots of things, though I wouldn’t call myself obsessive. I like the legitimacy of putting something on a list. It means a commitment of some sort—something to be bought, a task to be completed, a thoughtful intention to do something.

I have the daily-weekly-monthly lists for work, but for the rest of my life, I mainly make lists for must-dos such as groceries, Christmas gifts, and errands. There is no formality to my lists. They are as basic as can be—words on paper. Often they’re written on small scraps or Post-Its with whatever I can get my hands on, pen if I’m lucky, pencil crayon if I’m not.

The grocery list is my most formalized list. It lives under a magnet on the side of the fridge. It’s simple, accessible. Everyone in my house knows what it is, and why it’s there. And to my great annoyance, I’m the only one who uses it. That means that even after a $300 grocery bender, I can still come home to someone asking why I didn’t buy Cheerios. “Because you didn’t put it on the list!!” Big sigh. 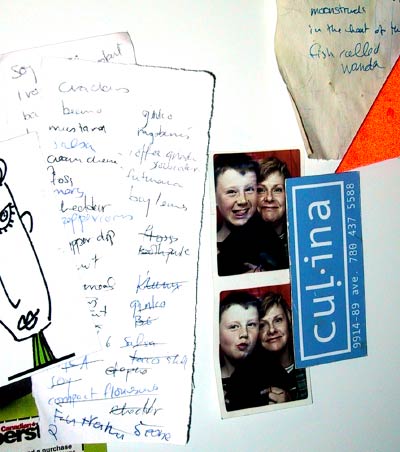 My favorite lists are ones I do most infrequently—life goals and ambitions. The list of big dreams. I’ve done these off and on for years, and they follow a fairly strict format. Things can’t be as simple as “win the lottery.” Items on this list have a certain amount of thought behind them that address the particulars of how to make something happen. My practice has been to spend time creating these lists, and then promptly forget about them. I now tend to save them on my computer, which means I could look at them occasionally, but I never do. Since I’m rather disorganized elsewhere in my life, these lists are usually lost, then turn up accidentally while I’m going through old notebooks or papers and files. The best thing about these occasional findings is remembering what I dreamt about long ago, and what I can check off.

Much to my surprise, I seem to have had a plan for how I wanted things to be. I have the two kids, a house by the ravine, work I can do from home, a Master’s degree—all things that have appeared on my life’s grocery lists over the years. I think it comes back to the notion that putting something on a list legitimizes it and increases the likelihood that it might actually happen, whether you’re talking about getting a new job, having another baby, or buying Cheerios.