“A good listener is not only popular everywhere, but after a while he knows something.”
– Wilson Mizner

Introduction
How often do we want to simply make our point, instead of bringing our opinions together to reach consensus? Wouldn’t the world be a much better place if we looked beyond our own limited perspective to understand other beliefs, thoughts, religions, passions, and goals? Leaving the issue of world peace to others, we think that this same behavior pattern is happening in design and business. Look at all the PowerPoint presentations and slick brochures: we want to tell our view, instead of listening to others. We want our opinion to be heard. It is precisely this desire to have our opinions be heard and to advance our own perspective that fuels issues of “paradigm dissonance” as attempts to resolve conflicting paradigms that demand compromise and collaboration. Identifying paradigm dissonance as a source of problems isn’t new (for example, look at the fifth highly effective habit1), but creating a framework for dealing with this problem in a business and design environment moves this idea in a new direction.

Defining the key terms
Let’s begin by examining the often incorrectly used terms “mental model” and “paradigm.” According to hyperdictionary.com, a paradigm is a generally accepted perspective of a certain group, whereas a mental model (or cognitive map) is defined as an interpretive framework of the world.

The mental model, it is argued, exists in the human mind and affects actions and decisions as well as knowledge structures. This means that a paradigm is an element within a mental model. In our experience the differences in paradigms among designers, managers, users, engineers, information architects, graphic designers, etc. are a major reason why business and design problems exist.

Exploring the problem
Mid-size and large corporations, as part of their growth over time, divide employees into multiple departments. This employee fragmentation contributes greatly to political games and jockeying for control (e.g., “This is mine. That is yours. Don’t try to tell me what to do with mine.”), while hindering effective communication and contributing to each department feeling like its view is right and the others’ are wrong. The latter issue arises mostly because one department does not understand what the other department is doing and, more importantly, WHY they are doing it. That question of WHY goes back to the differing paradigms.

Further complicating the situation, humans tend to make what social psychologists call the Fundamental Attribution Error, which is to blame other’s perceived mistakes on some intrinsic aspect of that person (e.g., their personality or personal abilities: “they must be stupid to have made that decision”) and ignore other possible reasons. These reasons include situational variables driving behavior and also differences in paradigms; in the other paradigm the decision is perfectly logical, but you need to see it from that perspective to know it is logical. Of course, as part of this attribution error we tend to perceive our own actions as being externally driven and not internally driven.

There are three potential approaches to dealing with this problem. On a strategic level, the insights in paradigm dissonance are crucial because those constitute the starting point for all future activities. On a tactical level, understanding is important, but there’s no need to work out all the differences: to indicate and understand them is enough. On an operational level, adjusting paradigms isn’t always possible. Therefore accepting the difference and building a pragmatic link between them seems a good thing to do. The effort in adjusting paradigms is related to the number of people involved and the importance of adjusting the paradigm. 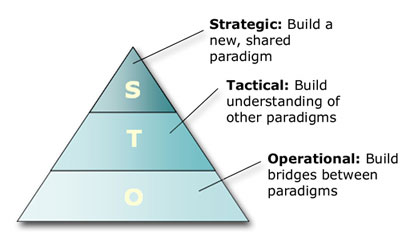 Let’s take a closer look at the different approaches:

1. Strategic: Build a new, shared paradigm
This process is focused on building a common language, which is the starting point for future exchanges. For example, bring the IT, sales and financial departments together. Have them define “customer value” (see also paradigm mapping). In the practice of information architecture, when you want to adjust the design of your website to the paradigm of the visitors, you can execute a click stream analysis or exit survey to learn more about their underlying values and beliefs. Information design practices also come in handy when we want to form a new paradigm for a specified group. These help in discussions concerning what a certain model means to people.

2. Tactical: Build understanding of other paradigms
Facilitate interaction among different groups by putting more focus on interdisciplinary departments and interdisciplinary training. The web has been fairly effective at bringing together the graphic designers, programmers, project managers, and user experience professionals and putting them on the same team, which has resulted in a number of paradigm dissonances. Even beyond development team coordination, however, is the issue of understanding the customer’s paradigms. To better understand those paradigms, establish interaction with the customers, for example by installing customer focus groups. Those groups represent the ideal or typical customer and through their interaction with the company website and materials, various aspects of the differing paradigms involved become apparent.

3. Operational: Build bridges between paradigms
Accept differences in paradigms and implement smart ways of dealing with them (Fig 5). For example when confronting the paradigm dissonance between customers and suppliers, build a taxonomy for both and make 1-to-1 relationships (also see the Modular Network Design method, Hoogeweegen et al). For the paradigm conflict between managers and employees, one can implement a management dashboard, based on the existing paradigms in the organization. 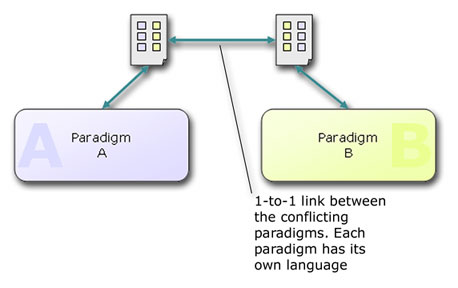 Future directions
Dealing with differences in paradigms is fairly new and is a field worth investigating. In our experience it is the source of many business issues, for example: unsuccessful implementations, inefficient business processes, and design problems. An important first step is to visualize the differences in paradigms, so that the process of connecting paradigms, establishing new paradigms, or building understanding of other paradigms can begin. Through visualization the process moves beyond just talking about the differences, which is often not enough, because all the issues and relevant elements are interrelated and, to some extent, are locked in place. Visualization offers a unique shared starting point and valuable framework for moving forward.