The very nature of UI patterns requires that they be familiar to end-users. An individual UI pattern is a discrete, repeatable unit of user experience. I refer to collection of patterns as a library.

In many cases, less proprietary patterns are more useful in solving a design problem as they can be implemented more uniformly across platforms. This characteristic and the efficiency gains make patterns an excellent opportunity for software companies to come together and promote UI patterns to the wider development community.

Producing a common pattern library, however, implies that the patterns presented are at the very least, consistently documented and most probably presented in the same single classification system. Currently though, patterns are classified and documented in various manners across publishers with no clear standard evident.

However, as the numbers of systems grow within an organization, so does the effort needed to maintain the quality and consistency of the user experience. For many organizations, it is now impossible to assign much, if any, time of a user experience specialist to all implementation efforts, and experience has shown that the UI guidelines and principles approach to propagating a single user experience standard does not scale well.

There are two common issues, both major.

The first issue is ensuring developers are familiar with all the principles and guidelines.

Documentation to fully describe a UI standard is, by its nature, extremely detailed and complex. Getting developers to know all this information intimately is an ongoing and often un-winnable battle.

The second major issue is that the application of guidelines and principles can be open to wide interpretation.

Requiring developers to combine guidelines and apply principles together to create a complete UI can be inefficient. This synthesis process can result in widely-varying solutions to a single design problem across teams — especially when working with widely distributed and possibly culturally diverse groups. Removing these variances to create a more consistent user experience requires rework.

UI patterns to a great extent mitigate the problems of weight and interpretation experienced with the principles and guidelines documentation approach of the past. In essence, patterns can be seen as prepackaged solutions based on guidelines and principles.
Patterns and pattern libraries are more convenient for developers because they solve common higher-level design problems without the need for deep knowledge of often-complex guidelines and principles documentation. Also, they implement best practices, so developers don’t synthesize what are often “slightly original” solutions that would need to be reworked later.

Much of the value of a pattern to the developer is its less granular and more physical nature. Principles of good UI design dressed up as UI patterns add little value over traditional guidelines and principles documentation, as seen in many of the UI patterns as described in the Design of Sites; examples such as “Low Number of Files” — while an important design principle or guideline — do not deliver up a usable UI component.

Also important is creating the patterns to begin with. The guidelines and principles that form the foundation of patterns still need to be developed before any patterns themselves are developed.

Integrating UI patterns into the culture of software development is to a large extent still beginning. Next-generation development tools such as those proprietary ones being developed by enterprise software companies that implement patterns natively are now or will be soon in the hands of developers around the world.

Embedded drag and drop UI patterns hold the promise to empower developers to create better user interfaces, faster — unsupervised by user experience specialists. While this may strike fear in the hearts of many a user experience specialist, issues of scale dictate such a pragmatic approach. Be aware though, that they also can perpetuate problems if the UI patterns implemented are out of sync with end-user expectations.

Currently, there is no recognized standard for the classification or documentation of UI patterns, as seen by browsing through pattern libraries from:

The variety isn’t surprising, since applying the pattern concept to user experience design is a relatively recent phenomenon. However, the successful introduction of a single classification and documentation standard could significantly increase the value of a UI pattern library to developers by… 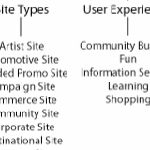 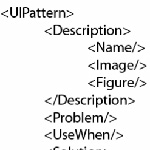 Welie’s documentation approach is simple, with a focus on visual elements to explain the function of the pattern. It can be broken into three main parts:

The following is a map of Jennifer Tidwell’s UI Design Patterns. (Click image to enlarge.) 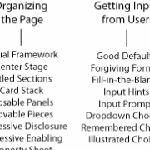 Unlike Welie, Tidwell does not take into account different delivery methods. The eight categories she does specify look to be based on functional subject areas only.

The following is a map of Sari Laakso’s UI patterns. (Click image to enlarge.)

Like Tidwell, Laakso does not differentiate between delivery methods; he bases all seven of his categories on functional subject areas.

The Design of Sites’ patterns

The following is a map the patterns presented in “The Design of Sites.” (Click image to enlarge.)

The most extensive pattern collection of the four sampled, Design of Sites does not specify delivery methods, and, in some cases, the items presented could be regarded as design guidelines or principals rather than patterns. Twelve categories are presented with a mix of content and functional subjects.

Functional subject classifications are based on logical breakup of functionality (for example, shopping cart and two-panel selector). This is the most common prevalent classification type and is found in all the collections sampled.

Based on the publicly available pattern libraries available today, there is no clear indication as to whether “delivery method” is a valid classification type. An argument could be made that the process of binding a pattern to a specific technology is will reduce the life of the pattern as platforms develop. However, the timelessness of a pattern is of little consequence to developers whose primary goal is product delivery rather than pattern lifecycle.

This author would like to include an additional classification type: Level.

The level classification would further divide patterns into the following areas of concern:

In the case of the collections previously reviewed, the great majority of patterns would be classified as falling under the “site furniture” level type. However, it is this author’s view that considerable potential remains to develop patterns within the proposed navigation architecture and screen architecture level types. 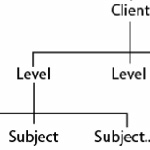 Content and functional subjects would be implemented as tags because these classifications would occur across levels.

Why have a classification hierarchy — aren’t filters or tags more useful?

In many cases, being able to filter by classification node as required is more flexible than drilling down through a preset hierarchy. However, a present classification tree is also useful to:

The value of a standardized UI pattern documentation to developers is a single interface for search tools. Such tools hold the potential to streamline the off take of UI patterns by developers with specific problems to solve in a world with hundreds and potentially thousands of UI patterns to choose from.

UI patterns are by their nature visual. It must be noted that strong support for pictorial content would seem obvious and reduce the necessity for long verbal descriptions that add little value next to their visual equivalents.