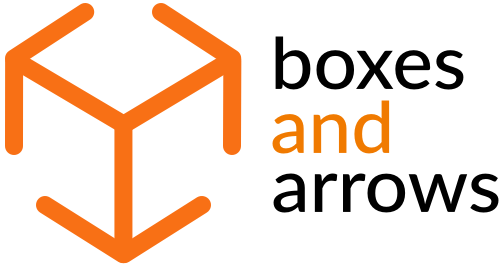 Just before the 2020 new year, we decided it was a good time to refresh the Boxes and Arrows brand identity, a time to start a fresh decade with a fresh logo. And, after a few weeks at the drawing board, we’re liking the results.

To us, the new, dynamic, and pleasingly symmetrical icon—a box made of arrows—represents the emerging dimensions of information spaces, greater interconnected continuity between people, and an ever-expanding collection of knowledge which we hope to bring to our readers.

END_OF_DOCUMENT_TOKEN_TO_BE_REPLACED

As you are reading this, how many times will you check your phone for a text, an email, a shared link, or photo? Some of these moments of attention will be based on alerts, but how many are habitual, simply checking the device for potential updates?

Our minds are continually looking to continue earlier conversations or to start new ones. We have sometimes dozens of ongoing conversations, not to mention the long list of open tabs and draft emails containing trains of thought we intend to follow up on.

We are living in a continual shift of focus, and this article aims to provide some understanding on how our minds are adapting to constant changes in train of thought.

END_OF_DOCUMENT_TOKEN_TO_BE_REPLACED

Success is a difficult thing. What exactly does it mean? Rising to the top, or getting what you want? Having respect for your achievements? Whatever it means, it’s a regular expression in The Netherlands. You know, that funny place sometimes referred to as Holland, where, as they say goodbye, they wave and say, ‘Success!’ Now, I’ve seen it happen occasionally in other places, but never with the same degree of bitter humor or comical irony. Whatever it actually means, the Dutch seem to suggest, ‘Success… it’s a new thing.’

The Dutch are, historically, very good designers, seeing design as a facet of their culture. Like architecture, design is a public necessity and a purveyor of improvement (or ironic comments on improvement). So, when something becomes improved, like the design of an interface, it is a success, but it’s still only a stepping stone to the next improvement. This idea hints at the problem with success stories. They capture the moment very well, but lead to the feeling that you have reached the end of the improvement, when quite regularly it is the opposite–you have simply just stepped a little farther towards a relatively unknown goal.

Designing Interactions by Bill Moggridge[1] does an excellent job of revealing the people and the work behind many of the most important interactive products of our time and discussing their impact on the field of interaction design. END_OF_DOCUMENT_TOKEN_TO_BE_REPLACED

I remember reading those Scientific American magazines when I was a kid. I liked them because the design of the magazine was funky, almost a 50’s image brought into the 80’s. It had a flair for interjecting human qualities, humor, lifestyle issues, even cosmetic thinking, in a way that no other ‘serious magazine’ really did. I, like so many other people, did not read it or even just look through it, for the amazing scientific breakthroughs that they reported, but because it was well designed. So, for me, it wasn’t a science magazine, it was good design, and that was rocket science.

“Rocket Science” is one of those expressions that conjures up a lot of thoughts, but mostly it means something is incredibly smart, basically breaching the impossible. Now, I find “The Impossible” breathtakingly exciting, the idea of something not being able to happen just somehow thrills me to bits. For example, it really makes me tick that it’s practically impossible to design a reasonably easy to use, or aesthetically interesting, computer interface. But, there are a thousand good suggestions on how to get started on such an endeavor this in this book.
“Interaction Design: Beyond Human-Computer Interaction”:http://www.wiley.com/WileyCDA/WileyTitle/productCd-0470018666.html [1] is cunningly released at a time when acceptance of Interaction Design as a discipline is reaching a critical mass. The book precipitates a huge turn in the creation of interactive technologies toward the more research/creative or human-centric model, approaching the subject of this change from different angles and illuminating historical insights.

END_OF_DOCUMENT_TOKEN_TO_BE_REPLACED

New Web 2.0 interaction design can offer a lot of new suggestions for easier interactions, good use of white space and other glaring design solutions to the typically very busy space of information architecture. But, if you practice IA well, including some new Web 2.0 techniques, you can begin to create mental space as well as white space. Designing the Obvious: A Common Sense Approach to Web Application Design

, a new New Riders book by Robert Hoekman, Jr., is a great place to find out how much mental space can be offered by your systems.

We, the people, as users of these architectures, experience the downside of not having enough peace in the process of interacting with a poorly designed system. With almost a billion computers on earth and millions of unsatisfying interactions every minute, we are looking at massive amount of unintuitive interactions. END_OF_DOCUMENT_TOKEN_TO_BE_REPLACED

“…there is definitely not enough reliance on the information architect as a professional who can cope with the details and design challenges of creating a complex system, both for the process and for the interface.”

I would like to encourage the community to talk about the need for professional networks within the information architecture field, especially as it relates to creating successful software and information systems. And, I would like to compare our needs in the field of IA with the systems that have been used in other areas to determine if we can develop an appropriate support system in moving towards specialization in our profession.

The change within the interface design process over the past five to ten years has coincided with an increasing number of large companies refining an industrial style model of design instead of focusing on specialization or interaction sustainability through design accuracy. As a result of the overriding strategy, many smaller companies emulate the corporate model but find that it is indeed not sustainable; especially if they want to design appropriate interfaces and continue working within the respected boutique and agency models. This model of simply acquiring a larger IA strategy needs to change in order to give IA a place on the whole market and to allow professional networks to develop. END_OF_DOCUMENT_TOKEN_TO_BE_REPLACED

What if I suggested a new way of navigating an online information space? What if it was something we’ve all seen before but just never thought to use? I’m talking about subtracting away information the user doesn’t want.

Content filtering is a much more natural way of sorting through categories, especially when the majority of your content is under more than one subject. Think of a web page that has the game results from every sports game on earth; this may be a huge page, but it is somewhat conceivable. Some people might even call it helpful. As interaction professionals, we might start to think about ways to navigate or sort through the information on that page. At this point, some of you are likely thinking it needs to be organized and others are thinking it should just be put into a database. END_OF_DOCUMENT_TOKEN_TO_BE_REPLACED