In late January I had the pleasure of attending the VizThink conference in San Francisco. As an Information Architect I wanted to learn how to use different ideas around design to assist me with “big IA” and “little IA” projects. The folks kind enough to join me in this conversation include: 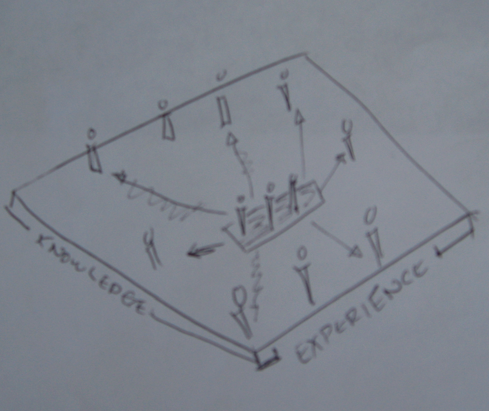 *Graphics empowering people* Ken Hope from Motive8 Infographics points out that a lot of the visualization tools empowers people to communicate ideas more clearly, without having to use words.

*Global Perspective* Noah Iliinsky and Rebecca Hope talk about the diversity of professionals, both within and outside of the design disciplines in attendance, and how the sharing of different perspectives added even more to the conference itself; backing up Daniel’s perspective of thinking outside the box. (In fact, 21% of the participants were from outside North America.)

*Common Craft* One of the many presenters at VizThink were the founders of Common Craft, Sachi LeFever and Lee LeFever. Rebecca points out that the end result is brilliant, but not knowing the work that goes into creating these simple, yet elegant videos, is common amongst clients.

*To Write or not to Write, that is not the question* Daniel points out the genius behind Common Craft is the writing or scripting of the videos that make Common Craft remarkable. Writing and illustration go hand in hand.

*KISS* Taking the time to reduce the noise will help your users understand the core message – whether it’s in design or writing to help guide the vision.

*Want to see more of VizThink ’08?* There were several photographs taken by professional and amature photographers while at the conference. For most of the photos, check out Flickr and search on the key word “vizthink08”.

*Examples of Design*
The following are images were created by Christopher Fuller; Ken and Rebecca Hope; and Noah Iliinsky. For a full size version of this art work, simply click on the image.

*Christopher Fuller*
This is a recent live illustration record I did of a dialogue on branding (The original is 12.5′ X 6.5′) that was given to a European banking client by Scott Bedbury – a former Nike and Starbucks marketing executive.

Just a little note of clarification on why I drew Lech Walesa in the bottom left corner. Mr Bedbury told a story about Lech Walesa coming to the United States to give a talk at a conference. One of the employees at the hotel saw Lech’s name in the register as a featured speaker and decided to google him. They discovered that his birthday fell on the same night as his speech, and so they arranged for the hotel wait staff to learn how to wish him happy birthday in Polish. According to Scott, it brought Lech to tears. It was a great story and one I knew I had to capture.

I do have the ability to do a reasonable caricature of Lech Walesa on the fly being a child of the 80s, history buff, and someone who gobbled up pop culture (um, there’s a prominent nose, moustache, etc.). But I don’t know how to write “happy birthday” in Polish. So while scribing the conservation I whispered to a colleague to google how to write the phrase and slip it to me on a post-it (I took my cue from Scott Bedbury’s story and copied the initiative of the hotel worker). By the time the conversation was over I had written “Wsystkiego najlepszego Lech Walesa” on the graphic. Of course, this went over well (though I think it’s not 100% right) since the meeting was in Europe and there were a few Polish participants in the audience.

*Ken and Rebecca Hope*
This infographic is a classic example of a “before” and “after” and shows why we love what we do! The client, Ifor Ffowcs-Williams, CEO, Cluster Navigators Ltd, is an international cluster development consultant.

In his workshops Ifor’s verbal communication is eager and interesting. However, his key presentation tool detailing the underlying process just didn’t do him justice as a typical Powerpoint slide. Although he is a visual thinker and speaks using lots of imagery and analogies, his presentation slides were all plain written text (even though occasionally highlighted for effect!) and didn’t capture the excitement or essence of what the process involved and offered. Also, when used with audiences with limited English, the text-based slides were not always understood. 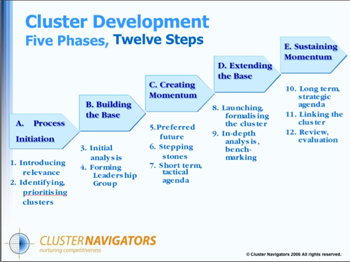 Essentially we brought the Cluster Navigators process to life. We visualised the process as a fun and dynamic journey, using simple imagery for each key stage to help audiences quickly understand the concepts and engage in the process.

The impact of the the infographic is probably best described by Ifor himself in this feedback he provided, “Why didn’t you show us this before?’ was the question from one of their Scandinavian clients on seeing our new infographic. “We’ve now used it in workshops and conferences on five continents. It’s brought out the smiles, made the learning more interactive and led to repeat business.” 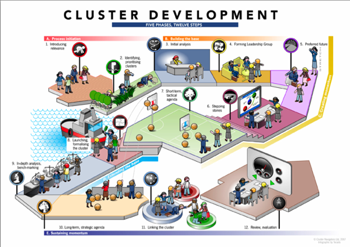 *Noha Iliinsky*
This diagram has been arranged to show not only the hierarchy, but also the intended use pattern of a typical, linear, non-fiction book. 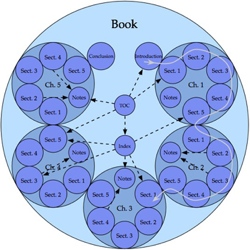 * Continuity in the book is indicated by contact of the circles.
* The gray line, progressing in small and large clockwise arcs from section to section and chapter to chapter, demonstrates the linear progression of the content.
* The dashed black arrows show some possible non-linear paths that may be traveled by the reader to view content that is not part of the main linear flow of the book.

The goal of displaying the use of the book, and not merely the hierarchy, has led to an atypical diagram that conveys more knowledge than the typical counterpart.

I created this diagram in the fall of 2003. It appears in my thesis, and was selected to be supporting material for the book The Practical Guide to Information Design, by Ronnie Lipton.

Transcript of Using Design Visuals To Communicate Ideas A Podcast from Vizthink 2008
[music]
Jeff Parks: This podcast is brought to you by TechSmith. Right now, millions of peoples are snagging. Are you? And by, the IA Summit. This year, your peers and industry experts will speak about how topics such as social networking, gaming, patterns, tagging, taxonomies, and a wide range of IA tools and techniques can help, as users experience information. For other events happening all over the world, be sure to check out evensts.boxesandarrows.com.

In late January, I had the opportunity to attend the VizThink Conference in San Francisco, California. VizThink brought together some of the most creative minds in design from around the world. On the last day of the conference I gathered together Daniel Rose from Bell Canada; Ken and Rebecca Holt from the New Zealand based infographics company, Motivate; interaction designer Noah Alinsky, and illustrator and designer Christopher Fuller from Griot’s Eye.

We cover a range of topics, including “How to truly think outside the box, ” “The power of illustration and design in communicating ideas, ” and personal highlights from the conference. Many thanks to everyone for participating in this discussion, and I hope everyone enjoys the podcast. Cheers.

Jeff Parks: I didn’t really have a theme for today. I thought maybe we could just talk about lessons learned, why people are here, and what they’ve learned, what they’ve enjoyed about the VizThink Conference, in general. Maybe we can go around there and everyone can introduce themselves to start, and maybe, the company you’re working for, and what you do. Can we start over here?